‘The Master Speaks’ – A New Way To Get External Direction

How do you go about getting external input, confirmation or direction on what you should be doing?

My own process has always been to seek feedback from those close to me, whilst others use Astrology, tarot cards, and a host of other options.

If you have an interest in any of the latter, then here’s another option… 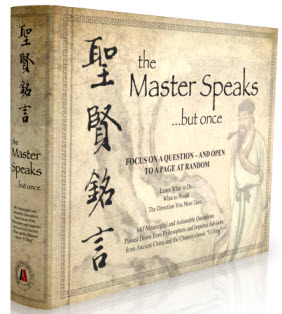 Recently, I was given a pre-release version of the Master Speaks … but once, a collection of 683 meaningful and actionable quotations passed down from philosophers, imperial advisers and senior civil servants from ancient China.

The quotations featured in this publication have sat in libraries, research institutions and cultural centers around China for centuries, have never been published before or translated into English.

The principle behind this publication is that you ask a question and then “blindly” open the book to any page  / quotation which will give you direction on what you should be doing. (There is one quotation per page so, with 683 quotations, this is a big book.)

It took scholars more than six months to research and translate the quotations featured in this publication and the concept of opening blindly apparently is an old Chinese way.

Does opening a book blindly to get direction sound like an absurd concept?

It probably does – yet you could say the same about about other old Chinese ways such as Feng Shui and the iChing as well, both of which are practiced / used world wide, and not just by the Chinese.

Having an open mind and always intrigued by ‘old teachings’, I decided to give it a road test…

My question was: Why should someone want to become a Wealth Traders Partner?

The page which came up from my “blind” opening stated:

“A small pocket can’t hold something big. A short rope can’t get water from a deep well. There exists a gap between your true abilities and your ambitions. You should create compatible conditions and improve your abilities. Then you’ll get what you want — step by step.” Zhuangzi

This was a great summation of why someone should be considering our business building programs  – i.e. it improves your ability to grow your business and income.

I decided to do another test as follows:

Test 2: How do I tell someone they should be considering a co-brand of Partner Program?

A bit more direct than the first question. The page which came up in this instance stated:

Another accurate result as our partner program is indeed all about building a team, a sales network of your own in an exclusive territory.

There may be other quotations in the book which are more relevant, but I stuck to the rules – i.e. ask a question and open up blindly to get an answer!

I won’t be changing my normal decision making process as that is tried and proven.

However, I certainly won’t hesitate to pick up this publication as well as there’s no harm that can come from whatever is stated and who knows, the quotations may be suitable for inclusion in sales materials as I have done with the above.

As I mentioned above, I have a pre-release version of the Master Speaks… but once. The actual publication has yet to be published.

Maybe this new way of getting external direction will give you a positive outcome as it has for me.