Facebooks Impact On Education In Asia

Facebook has spurred children in under-developed countries
to develop computer, writing, and collaboration skills
outside the schooling system!

There are many reports on the Internet which point to the benefits of Facebook – and other social media – as wonderful educational tools for development of writing skills and collaboration amongst children.

Of course, that’s all well and good if you have access to a computer and have the skills necessary to utilize the medium.

Unfortunately, that isn’t the case in the Philippines – and most likely other under-developed countries – where a large number of households don’t have a computer and children get NO EXPOSURE to computers at school until 4th year high school (i.e. 15 years of age) in many public schools.

Like in most parts of the world, it’s “cool” for teenagers to be active on Facebook – and that’s particularly good in some parts of Asia where children need something to motivate them to develop computer, writing and collaboration skills as soon as possible rather than starting at 15 years of age.

Here’s an example of what is happening: 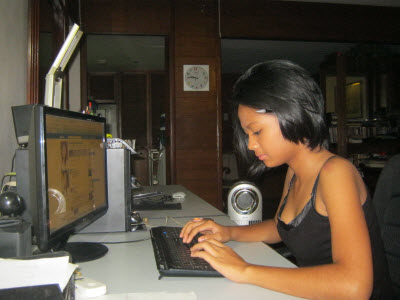 I have sat and watched Espie online and I am amazed at her proficiency – her keyboard skills are better than mine and she knows her way around Facebook much better than me (mind you, that would not be hard).

The fact that she knows everybody on her Facebook account gives her a mechanism for lifetime contact, something we adults didn’t have when we were younger. That could lead to any number of opportunities for her in the future.

Espie has had access to a computer at home and also is welcome to make use of my computer whenever her family visits.

However, many of her friends don’t enjoy similar access and therefore maintain contact by going to Internet Cafes at a cost of 30 pesos per hour (approx $0.70). When they do, checking out their Facebook account is a priority ahead of games or anything else they do online. For many, they go to an Internet Cafe solely to update their Facebook account.

Many of these kids have a Facebook friend list as big as Espies – even without a computer at home!

Even allowing for the failings of the local education system, it is fabulous that children like Espie are taking the initiative by becoming active on Facebook.

It could have a significant impact on their lives as the big growth sector in the Philippines is outsourcing / offshoring, a sector which requires computer and writing proficiency. These kids are simply doing themselves a favor by becoming “computer” proficient at an early age!

There have been many times when I’ve sat in Starbucks and noticed a group of kids sitting there looking over one another’s shoulder as they work their way through Facebook … and that’s because only one of the children is fortunate enough to have or own a notepad.

I applaud Facebook for providing a platform which delivers educational and life skill opportunities such as the above.

It is playing a vital role in helping young children in under-developed countries build important skills for the future, skills which would otherwise be hard to develop if it (or a comparable service) were not available and they had to rely on an inadequately funded schooling system.

Yes, Facebook terms of use say that you must be 18 years of age to have access. I sincerely hope they change this soon and allow all teenagers – at least in less developed markets  – to maintain their accounts.